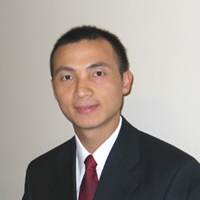 Dr. Deng’s research has been supported by the National Science Foundation (NSF) and the Department of Defense (DoD).