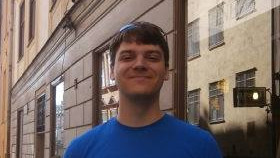 Austin received a B.S. in computer science from our department in 2012, receiving the “Outstanding Undergraduate Student” award at graduation. Since graduation he has been working as a software developer for Datawatch Corporation. During his time with Datawatch he has worked on several desktop products, earning a Microsoft Certified Technology Specialist (MCTS) certification for Windows applications development along the way. Recently, Austin lived in Stockholm, Sweden for three months to facilitate the integration of a newly acquired team / product into the organization and upon returning acted as technical lead for a team of developers at the Datawatch office here in Greensboro.